Wild Turkey: 29. Record high. Wild Turkey was first detected on the Tobermory count in 2008 and the growing numbers on the Peninsula reflect an ongoing increase throughout the Great Lakes area over the past decade. 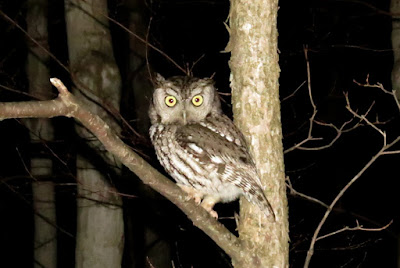 Great Black-backed Gull: 0. This marks only the second time in 17 years that the species was absent from the count (average=4).

Summary: Individual birds were scarce although the species total (41) was close to the 45 year average and up from last year's tally (36). You may recall that extreme winter weather last year made for tough birding conditions on count day.

The low totals for Common Raven and Herring Gull may reflect changes in how our municipal waste is managed at the St. Edmunds Landfill site. While I have no direct knowledge of how things are done at our dump, many landfills have recently adopted the practice of compacting and covering freshly dumped waste at the close of each working day. Not surprisingly, such sites are far less attractive to scavenging birds. We'll watch for this in the coming years.

Once again thanks to all who contributed to a fun and successful day.

Trivia: Only seven species have been recorded on every Tobermory CBC conducted since 1973. They are: Common Goldeneye, Herring Gull, Downy Woodpecker, Hairy Woodpecker, Common Raven, Black-capped Chickadee and Golden-crowned Kinglet.
Posted by Michael at 12:41 PM

Sites of interest - midwest US